After researching weekend getaways from Washington DC, Weekend trips from Washington DC, and just about every other keyword meaning “I want to get out of Washington DC for the weekend”, we eventually stumbled across information on Davis, WV.  Whitney and I both love getting outdoors and seeing the mountains, and while Hertz is running their $25/day weekend rentals, we thought that now would be a great time.  We used hotels.com and got a $74/night (after tax) room at the Canaan Valley Resort and Conference Center.  The resort was aging, which was obvious, but the scenery was amazing, and the price was right.  Don’t expect the equivalent of a 5 star hotel, but expect great service, abundant wildlife, and fantastic scenery.

Our first place to visit was Blackwater Falls State Park, but first we decided to grab lunch at Blackwater Brewing Company, which appeared to have a decent biker turnout, so we assumed it would be good.  There was a group of 20+ bikers, and with this being a small place, they clearly weren’t staffed for the surge of people, so service time was almost 2 hours for lunch.  Not entirely their fault however, it’s a small town, and we realize that.  We each had the BBQ burger, which was decent, but nothing spectacular.

After lunch, we headed back to Blackwater Falls State Park.  The main attraction was the falls, however the entire park was a scenic drive.  We went to the falls first, which are off a very well maintained trail with new steps.  After that, we headed to Lindy Point overlook, which is about a 1/4 mile hike through the woods.  The view was amazing!

After running home to grab a hamburger and some lighter fins, Phillip and I headed to Cave Excursions East.  We once again got fills and headed towards a boat ramp.  I’ll write more about this one later.  It wasn’t my favorite dive, but I didn’t hate it like I do Little River.

Here’s a video of the system shot by Wes Skiles 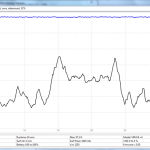 After Phillip arrived at my parents house around 9am, we headed over to Amigo’s Dive Center and got our LP85’s filled.  With a heat index of over 100 degrees, gearing up wasn’t going to be any fun at all.  Makes me wish I lived up north this time of year!  After arriving at the Royal Springs boat ramp, I started inflating the boat and put it in the water.  After getting all our gear loaded, we headed approximately 1/4 mile downstream and found clear water off to our left, what we were looking for!

We pulled the boat over and were greeted by two brand new “No Trespassing” signs nailed to a log.  We geared up on the river side of those, and swam under the land bridge, then up the stream into the cave.  The cave is a series of 3 inline sinks, all with “Ginnie Clear” water.  This cave really is a gem, so close to everything, yet undamaged.  We swam about 1000ft with an average depth less than 15ft, and crossed 3 sinks along the way.

Today after I got off work, my roommate Sam and I headed to Moss Park to test out my new (used) West Marine 9’6″ inflatable boat.  The entry fee is $3, and the park is open from 8am to 8pm, which is a lot more accessible than many of the local parks that close around 5pm.