Since I flew out with JetBlue from IAD at 4pm, the Air and Space Museum was a perfect thing to do.  It’s $15 to park and free to enter.  I had heard that this location was better than the one just off the National Mall, and I certainly agree.  The museum is an indoor hanger which includes a Boeing 707, SR-71 Blackbird, Space Shuttle, and many more very cool aircraft.  Off to the far corner of the building there’s a flight tower, which features a tour guide from Dulles International Airport who explains the monitors and how they work.  Watching how organized the flight tower really is was very cool, the operator was able to explain all the information in front of us within minutes.

The main attraction I was wanting to see is the Lockheed SR-71 Blackbird.  For those of you not familiar, the SR71 was a spy plane that is faster than any other plane ever made (and I think still is).  Here‘s a really neat site I found that has lots of information on the plane.

My favorite part of the museum after visiting was the flight simulator.  Whitney and I did the interactive flight simulator, where I was the gunner and she was the pilot.  The simulators allow you to do a full 360 degree turn while flying, or it will even hang you upside down for extended periods of time.  All in all the highlight of the trip.

Today Whitney and I headed west to do a day trip from Washington DC and kayaked the Shenandoah River.  We rented kayaks from the Down River Canoe Company, which were pricey at $39/ea, but it did include the transportation 12 miles up river, which gave us just over 5 hours of kayaking time when you included lunch.  For lunch, we packed sandwiches and found a really neat rock face to eat on.  The further upstream you go on the river, the more minor rapids you face, although none that we saw during our 12 mile route were all that bad.  The front desk there will loan you dry bags for cameras, and they also watch your keys for you.  All in all, a GREAT day on the water.

Today Jeff and I had planned to hit up a spring near Wakulla, but the landowner is no longer allowing access, so we were able to take things slow and get a late start to our day.  This was a sinkhole which neither of us had dove before, but we knew it was gorgeous from photos. Ben has taken some excellent underwater shots, which can be found here.

This was one of those sinks that really makes you think about pollution.  It’s right by a major road in Tallahassee, and the land surrounding it is being used to dump all sorts of garbage.  If you recognize this site and decide to dive it, please be very careful, as homeless people are living here, littering the place with needles, beer bottles, liquor bottles, and various other trash.  Due to the pristine nature of this site, and how fragile it is, I’m going to limit my blog post to only surface photos.

Upon surfacing, we were greeted by four homeless people, three of which showed warning signs that they were on “meth”, and all 4 drunk. We were as nice as we could possibly be, but hurried back to the truck where we could take full advantage of our 2nd amendment right to protect ourselves.  They were very friendly, but I’m completely unfamiliar with drugs, so I didn’t know if they could become violent or turn on us.

Jeff and I woke up early — 6am to head to the Wacissa River and do some cave diving.  We had been looking at the Geological Survey and found several potential leads.  We found a place that rents canoe’s (link here), although at $30/day it’s not cheap.  Wish my boat didn’t have a leak in it, we could have saved money AND not had to paddle, but I’ll deal with that once I move back to High Springs.  The Wacissa river is excellent for Kayaking and Canoeing, as you’ll see from the photos at the end of this post.

Our first stop was Little Blue Spring.  This spring is gorgeous from the surface, and we were very excited to see crystal clear water flowing out of the spring run.  Since this site was on tampadiving, we were almost positive that we would find cave here. Unfortunately, we didn’t find any cave here, so we had to continue on.

We found another spring run, this time Garner, a very long run with several shallow spots and logs that force you to get out and pull the boat. We saw that there was line in this one, so we geared up and took a look.  The line here is extremely fragile, so we ran our own line the first 600ft of the system.  About 400-500ft penetration, there’s a T, which we went to the right at.  On exit, we were faced with zero visibility practically the whole way, and when I mean zero, I mean it was so muddy that I couldn’t tell my light was on at times.  I would suggest staying out of this system unless you’re extremely comfortable in zero viz.

After heading out, Big Blue Spring was our next destination.  We were told that this one had cave, but hadn’t actually been there before.  Upon arriving, we saw several swimmers, this appears to be a popular spot to park the boat, drink beer, and swim.  We pulled the canoe over to the side and started to gear up again.  The bottom of the spring is about 40ft deep, with a circular opening that’s like swimming through a fire hydrant, worse than Devil’s Ear or Jackson Blue.  Once through the entrance, there’s a no mount restriction (you might can do it with just one tank off, but no mount is easier on the cave) just before the mainline of the cave starts.  The mainline goes about 200ft and then dead ends.  This system is very pretty, but short.

Starting to get hungry, we packed our gear and headed home.  On the way, we decided to check out one more spring, this time Minnow Springs.  At first, I started to not get in the water, as the basin looked extremely small, but decided to give it a look just in case.  After looking, I saw that there was potential, and grabbed the sidemount tanks and suited up.  Once inside the cave, I was thrilled to see that there was no line!  This system is the first one I’ve ever been in without line!  I laid about 80ft and then hit a no mount restriction too small for me….darn!

After boating up river looking for potential leads, Jeff and I ran across the Suwannee River Rendezvous Resort & Campground, where there was a spring run.  We didn’t make the connection that this was Convict Springs, so we went to the office and asked the manager if we could dive here, only realizing what cave it was when we saw the map on the wall.  This is a nice place to camp, it has hot showers and a place to eat all on site.  Upstream from here is a great canoe spot as well!

We got in the water at about 10pm, and had to be out by 11pm.  Because of this, we limited dive time to 45 minutes.  Convict is a beautiful system, with rocks that look like egg shells, formed around something (possibly clay) that has been washed away.   There’s also a tree root growing dead center of one of the cave’s large rooms.  The system is incredibly fragile, and very silty.  If you’ve not been in many silt outs, wait to go here until you gain experience in them. 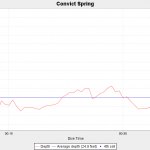 Today Jeff Marchand and I decided to take the boat out from the Royal Springs boat ramp and go see one of my favorite caves.  We went about 1/4 mile down river and geared up.  We added arrows every 100ft into the system, and easy task since the line was all knotted.  We only got to p900ft before a nice size rock fell on Jeff’s head and he wanted to get out….fast.  On the way out, we saw a side passage at about 200ft from the first sink.  I grabbed a spool and headed down to explore.  Having to take a tank off, I knew it was tight, and I could see the viz degrade quickly, but about 50ft in the cave clearly opened up.  Once I got to the more open section, my hose o-ring extruded and gas went everywhere, causing my startled self to stir up silt, and the exit took FOREVER.  Lesson learned, keep a better eye on line quality! 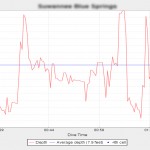 Some of you may have noticed that my blog has recently been rather…inactive?  Well, finals at the end of the semester were a bit rough, so I had very little time to get out and do things.  Today I graduated from the University of Central Florida with a BS degree in Information Technology. I’m not really sure what I can write about this, it’s seemed like a long 4 years at some points, and then others I wonder where the time has gone.  I got to attend the opening of our arena, football stadium, watch our football team work it’s way to our 2nd ever bowl game & first CUSA title, as well as see great academic marks as well, such as US News ranking UCF in the top 150 schools nationwide and placing them on the top 5 up and coming colleges.

Here’s a few photos from the ceremony and afterward.  Unfortunately they had to all be taken inside due to a heavy rainstorm that we couldn’t wait out due to having to return the gown within 2 hours of the ceremony being over.