Notes:
After diving with Brian in the AM, I had a surface interval and then met Ryan and Sam to do a quick run down Hill400.  This was Sam’s first time off mainline Ginnie, so we covered the dive plan and were in the water.  Sam ran the primary, and had an interesting time due to the fact that the NACD conference visitors had left 5 primaries already in the system, which left very few good tie off spots.  The two of them would lead, and I would scooter along behind them, as I’m still trying to gain scooter hours.  I had a stage bottle that I would breathe, and reserved all of my back gas to ensure that I had enough gas to swim out sharing gas, since scootering out wasn’t an option with only 1 scooter between the 3 of us.

Notes:
Met with Brian to do a dive to Mainland.  The plan was to double stage on the scooter ride there, dropping the first stage at stage bottle rock (about p1800), and then breathe the second stage all the way to Mainland.  From there we would use limited backgas to see whatever we could, and then head back.  Unfortunately I got a little ambitious, and jumped about 10ft too early into a low, silty, and probably better off side mount passage.  One thing I learned, make the OTHER guy lead in a siphon, a single errant fin kick blitzed the viz, and we were both left on the line for the exit. Once we returned to mainline, viz was about 10-15ft, but still enough to get on the scooters and try to speed up the exit.  Viz cleared around the Insulation Rooms, and by the time we were getting to the Maple Leaf, no evidence of our error was left (whew! I thought we were going to read about ourselves on CDF or TDS!).

Notes:
Met with Jeff after he got off work at Ginnie and headed to the Devil’s area to gear up.  The plan was a simple scooter mainline dive here, nothing fancy.  We would scooter until it became too small, drop the scooters and start swimming.   We hit our turn pressure around the scraper, all in all a pretty uneventful dive.

So I finally took the time to research how to jailbreak my iPhone a few weeks back, and I thought that I would make a post on some of the cool apps that you can get from a jailbroken iPhone that you can’t get from the apple store.  Mine was jailbroke using tools found here.

Cydia
Cydia is the “hacked iPhone’s” replacement to the app store.  While the app store remains fully functional, Cydia allows users to search far more apps, as you bypass the fees that Apple charges to let programmers sell their software within Apple’s app store, and also allows you to get blocked apps, suck as GV Voice, which I’ll discuss later. 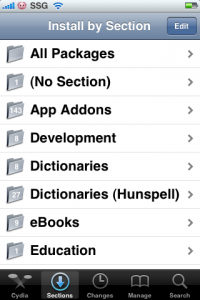 SBSettings
This is perhaps the most useful app that I’ve found.  You simply swipe your finger across the top of your iPhone’s display and it lists several frequently accessed settings that you can flip on/off with a single touch, much easier than going through a series of settings menu.  Most helpful is the ability to turn off 3g when I’m on campus, since we have Wifi, no need to waste the battery. 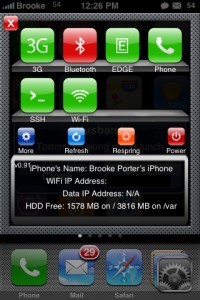 GV Mobile
GV Mobile enables you to use your Google Voice account to text message free, as well as place calls.  The nice part about this, is that it prevents people from seeing your real phone number.  This is helpful to those of us who have 2 or more phone numbers, as limiting everyone to only your Google Voice number empowers you to switch which phone all calls go to, screen calls, receive SMS via the internet, as well as block certain numbers at certain times of day. 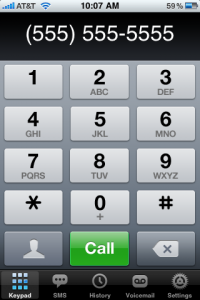 Notes:
Met up with AJ and Stacey late in the afternoon.  Stacey is quite frankly much better on a scooter than either of us are right now, so we had asked her to give us pointers, and guide us in the right direction to become more proficient on DPV’s.  Since she takes weekly water samples in the Insulation Rooms, we would tag along during this dive.  AJ and I lead during the dive so that Stacey could observe us.  Getting into Devil’s Ear just isn’t fun yet, I’m doing better, but still need work.  We made it to the Insulation Rooms, which was a new experience, as the jump line here is tied off to the ceiling, and scooters are great at floating as well as catching flow at the same time, so once again, as with any new thing in diving, very task loading.  While it’s not the easiest place to run a reel with a safety/stage, please don’t just throw your scooter or stage bottles in the clay where you jump off mainline, the damage is very evident from people doing that at this particular location. Anyways, back to my story….we got the scooters clipped off and headed down the passage, stopping for each of us to cookie the T and then following Stacey to the area where she takes her weekly samples.  On exit, AJ and I had decided to alternate towing each other, which Stacey said we did well.  However, we do need to work on OOA drills, as the additional task loading of the scooter made for a way to eventful drill.  Once again, deco was minimal (I’m starting to love the Gavin for that!).