After a long weekend of moving (I live on the 3rd floor, it wasn’t fun), it was time to goof off a bit.  North Florida is currently having some of the best conditions I’ve ever seen since I started cave diving.  Sadly these conditions are still terrible compared to the clear water I remember when I was much younger and going to these same sites to swim.  Jeff arrived at my place around 10am, so we packed up and headed to Stacey’s place to carpool over to Cave Excursions to get fills.  After that, we went to talk to the landowner, who is extremely cave diver friendly.  He said we could dive the sink, and to be careful. 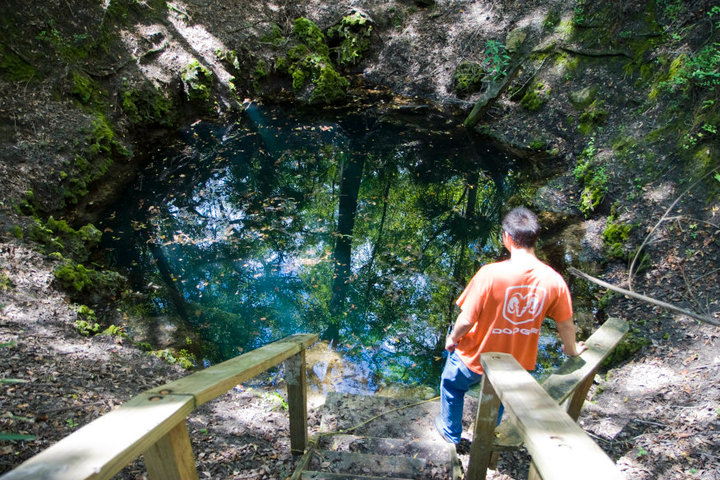 After a short drive, we were on a dirt road with no signs, but did manage to quickly find the sink hole.  There were concrete steps built and the land was cleared so that you could back right up and throw your gear in the water.  No picnic tables, but who am I to complain?  You can really tell the water level is low here, below all of the steps, so site entry here is difficult at best.  After gearing up and doing a bubble check, we were ready to head off!

We had mucked up the bottom a bit while getting our fins on and floating at the surface, but the water source was nice and cool, so we followed that into the cave, finding the primary line just before the overhead.  Once in the cave we were greeted with at least 30-40′ visibility, better than most people who have been around longer than me have seen.  Once in the cave, I was a bit perplexed that the size wasn’t quite what I had expected, as someone had told me that “Leon Sinks and Peacock had sex and this is what came of it”, but after swimming a few 100ft upstream, I was greeted by gigantic rooms, where my view was limited by the visibility, at times I could only see one wall.  Because of the visibility, it’s a great cave to have a team of 3 helping light the whole place.  Jeff was leading, Stacey was next, and I was in 3rd place, so I got to enjoy the view as those two lit up the whole place for me.  Around 1000-2000ft upstream, cave life heavily picked up, something I hadn’t expected.  Blind Crayfish were everywhere, big ones too!  There were also worms in the silt, I really have no idea what those things are.

I hate to write about the man made parts of the cave, but this one is special.  The 100ft markers are written on duct tape, which was wrapped around #18 twisted/knotted line.  Some of this belonged to Sheck Exley I believe, although I’m going to have to research things a bit more and figure out where exactly the markers and line came from.

After about 35 minutes of swimming upstream, we returned and exited.  Since we were in back mount, getting out was a nightmare.  We decided to take our tanks and harness off in the water and come back for the gear after we got out of our dry suits.