Notes:
I was planning a weekend of diving with Daniel Jimenez, who I had met while he was helping with drills and such during my Apprentice class with Jeff Bauer.  I got off work at 6pm, had forgotten my computer, and had to run back to the house through heavy traffic to get it.  We didn’t leave Orlando until almost 7:45pm, then we had to head to Ginnie to check in, and Wayne’s (Amigo’s) to get fills.  We both had our doubles and one stage filled with 32% nitrox, and a single AL40 deco bottle of 100% o2.

We then met up with Jeff Marchand at Ginnie, and reviewed our dive plan (that we had discussed via phone several times in detail).  We would go into the Ear, drop our deco gas on our line where we tied in, and then breathe the stage until we hit 1700psi.  We had reserved 100psi out of backgas to ensure we had enough gas to cover a lost stage (or if a buddies stage failed).  The stage lasted until about 100ft into the Hill 400, where there’s a nice rock to set stage bottles on. We all 3 dropped ours, and proceeded down the Hill 400 to the first jump beyond p1000.  We took that jump, and knew that the line would make a sharp left, which meant the ice room line was streight ahead.  We would tie in, and go streight, which would lead us up a little to a ledge, where the line would be just out of sight past the ledge.  From there, the Ice Room is just two T’s away, and to make it easy, you go right at both T’s.  The final 50-100ft of the Ice Room is VERY silty, and you really need to make sure you have the gas to go really slow to avoid a siltout, or damaging the cave.

Dive run time was around 105minutes, and roughly 15 minutes of deco (I lost my wet notes sheet that we calculated deco on).  We had reserved 50% extra deco gas so that any of us could have a failure and share our o2 to deco a buddy out. 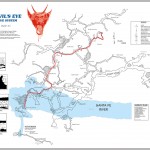 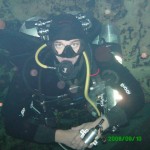